There once was a keeper who lived in a zoo... 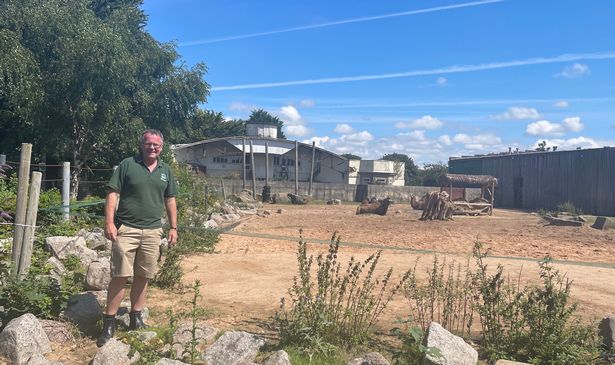 With more than 40 years' experience in looking after some of the world's most endangered animals you would think that our very own Animal Manager, Mike, would have seen it all when it comes to zoo keeping.

However, in a career first, Mike now lives here on site at the zoo in a converted air traffic control tower with our 37-acre zoo as his garden, which is home to more than 1000 animals!

Mike, who is 56, was born in Chester and started his career at the city's zoo when he was 16.

Over the course of the next 39 years, he moved to Oxfordshire and then Norfolk before returning to the North West in late 2021 where he took the position of Animal Manager in charge of our team of dedicated keepers here at the zoo.

While he has always lived very close to the zoos he has worked in, his new home has been a real eye, and ear opener when it comes to his somewhat noisy neighbours!

Mike said: "It is great to be back in the North West, Lancashire has always had a special place in my heart so working at Blackpool Zoo is perfect for me.

"Living in the zoo is brilliant, although I do get a 4.30am wakeup call from the peafowl that roam freely in the park!

"I can hear lots of animals from my flat; the gibbons, lemurs, parrots and the sea lions are probably the most vocal after the peafowl and there is a pair of visiting barn owls that sit outside my living room window.

"Having the zoo to myself in the evening is a privilege I have always enjoyed, but actually living on site makes it easier to take a look around once all the visitors have left.

"If we have had a baby born or a new arrival I will also go and check on them later at night, for example, we recently welcomed a new male orangutan called Kawan as part of the European breeding programme so I have been visiting him when the zoo is closed to see how he is settling in.

"After 40 years in the best job in the world I thought I had done most things, but I can now tick 'have a zoo for a garden' off my list too!"

Many of our keepers have lived in the converted air traffic control tower during our 50-year history.

Our zoo Director, Darren Webster, lived on site with his family when he joined the team in 1996 and our Section Head of Mammals, Luke and his partner Charlotte, who is our Deputy Section Manager for Elephants, also resided there after meeting and falling in love at work.

The keeper flats are located in a former air traffic control tower, which dates back to 1931 when the site was Blackpool Municipal Airport.

When World War II broke out on September 3rd, the site requisitioned as an RAF parachute training centre. To begin with, there was the air traffic control building and one hanger, now known as Hangar E.

Later, four more large hangars were built and Wellington bombers were assembled and flown off the site.

After the war ended, the airport was moved to the current Squires Gate site as it was deemed more suitable.

With more than 40 years' experience in looking after some of the world's most endangered animals, Animal Manager Mike now lives on site with our 37-acre zoo as his garden.