We get asked all sorts of questions here at the zoo... But this email and our conversation with a man named Chudders has made us smile so much we just had to share it with you.

So grab a brew, put your feet up and enjoy - we hope it brightens your day!!

Is it possible to buy & own a giraffe in Scotland?

I've been after a giraffe for years & now I want to make it a reality now!

I've got a decent sized back garden & I've got an upstairs/downstairs house so it could be fed from the bedroom window without any hassle!! They girls want a hamster but there howling!!

They involve a great deal of feeding, so neighbours tend to become a little irate when their carefully-tended trees begin to disappear from the top downwards.  You must also factor in your Health and Safety Ladder Training and Working at Heights training so as to be able to either access the higher branches for feeding or to take refuge on the roof from the previously mentioned irate neighbour.

Giraffes also need licencing for keeping in the UK.  This is considerably more expensive than your TV licence as extremely high and robust fencing is required to keep them from straying.  Another condition of a licence would be that a suitable building is needed.  Planning permission is very expensive nowadays and it also costs quite a lot to heat said house to suit a giraffe which, of course, is used to African temperatures.  You could, of course, put your Ladder Training and Working at Heights training to good use by installing solar panels on the roof (probably whilst still avoiding the irate neighbour).

Other pets in the family may show signs of jealousy towards your giraffe.  With a dog, this may involve weeing on the carpets or, if it’s a cat, shredding the arms on the sofa, but, don’t worry, with your training, you can avoid the wife at the same time as the irate neighbour.

All in all, a hamster may well be the better option. You can keep your marriage, pets and neighbours intact without fear of big holes in the lawn, or a huge head blocking the light through your bedroom windows.  There are some amazing documentaries on TV about giraffes, or you could, quite simply, visit ours.

I hope this has helped.

Thanks for the reply

I'm not worried about permits as I was going stink a big jcb sticker on it’s a**e & tell family & friends it was a new 13 ton excavator I'd accuired cause I'm sound that way!

Would you take a bribe?

Leave the in closure door open 1 night & I'll sneak in with my mates tipper. I'll only take 1, you have my word on that

If you’re looking for an efficient earth-mover, try an aardvark.  They’re smaller, don’t eat trees or upset the neighbour, can be a great friend to the dog and can dig at the same rate as 8 adult men.  You won’t need Ladder Training or Working at Heights Training and your biggest problem will be keeping your aardvark awake or finding the 50,000 ants it needs to eat each day.  On the plus side, you could go into Pest Control as your aardvark will be very much in demand in ant season.  Just an idea!

PS : We don’t leave the giraffes’ door open as they tend to upset the neighbours ….

Please explain why anybody in there right mind would want an aadvark?

Why an aardvark?  Where do I start?

Do you know anyone else with an aardvark as a pet?  No, that would certainly set you apart from your friends.

They’re cute, friendly and can’t bite as they have no teeth, so great for the family.

They get on well with meerkats, so shouldn’t be a problem with any other pets.

You won’t need expensive Health and Safety training as they live at ground level, but you may need rather a lot of sand as they do like to build their own beds by digging.

They won’t annoy the neighbour as they’re quiet, stay at home and sleep all day!  (Might be a problem with subsidence if you don’t keep them entertained – remember they are efficient diggers.)

There’s no such thing as an ugly giraffe, unless, perhaps, you’re another giraffe on the lookout for a mate, but there aren’t that many about, so beggars can’t be choosers.  We just have the four as well, so to take one out would upset the keeper’s OCD for even numbers.

50,000 ants – yes, that might be a bit of a challenge, but friends, neighbours and colleagues will be happy to donate them, I’m sure.  However, it would be the perfect answer to the kids’ request for a pet!  Hamsters sleep all day, can smell a bit and are known to bite, so not ideal.  Imagine going to school and telling the class you don’t have one or two pets, but 50,000!  Awesome!  Ant farming is definitely the way forward.  Might be difficult finding names, though……

Send you a Crimbo hamper.

I'll get my cousins Mrs to do your hair for free for life.

I'll do your driveway for half price.

Nobody can knock that back!!

I’ll have a look and see if we have an ugly giraffe, but I don’t think we do.

Your offers are really appealing.  £££££ are classed as bribery, so that won’t work but thank you for the offer, anyway. 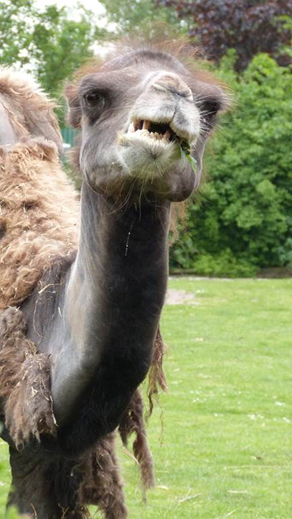 My hair’s fine, thank you, and I’m really happy with my hairdresser, but we have a member of our team, Sid, who could do with a bit of help! Is she any good with wigs?

The driveway repair may swing it!  We’ve had so much trouble with that recently and the insurance have threatened not to pay for the next car.

Are you QUITE sure you don’t want an aardvark?  It could work out much cheaper in the long run.

If you have camels that look that ill I'm kind of worried about the state your giraffes are in?!

I'll buy you a new car if need be lady?

Sid’s not ill – just a bit frazzled from all the attention he gives his ladies!  He obviously has a certain charisma with other (female) camels!!  Can’t see it myself, but then I’m not a camel!

I’ve just got a new car, but thanks for the offer.

I’m afraid our giraffe keepers just aren’t going to let this happen, but, bearing in mind a giraffe can kill you with one kick, look upon this as me keeping you safe, my friend.

It’s been nice chatting.  If you change your mind about an aardvark, well, you never know!  Have a great Christmas – I hear Pets at Home have some very cute hamsters!

Disclaimer: All our giraffes and aardvarks are present and accounted for, we checked, double checked and triple checked this morning. Sid's hair still needs attention.

We get asked all sorts of questions here at the zoo... But this email and our conversation with a man named Chudders has made us smile so much we just had to share it with you.