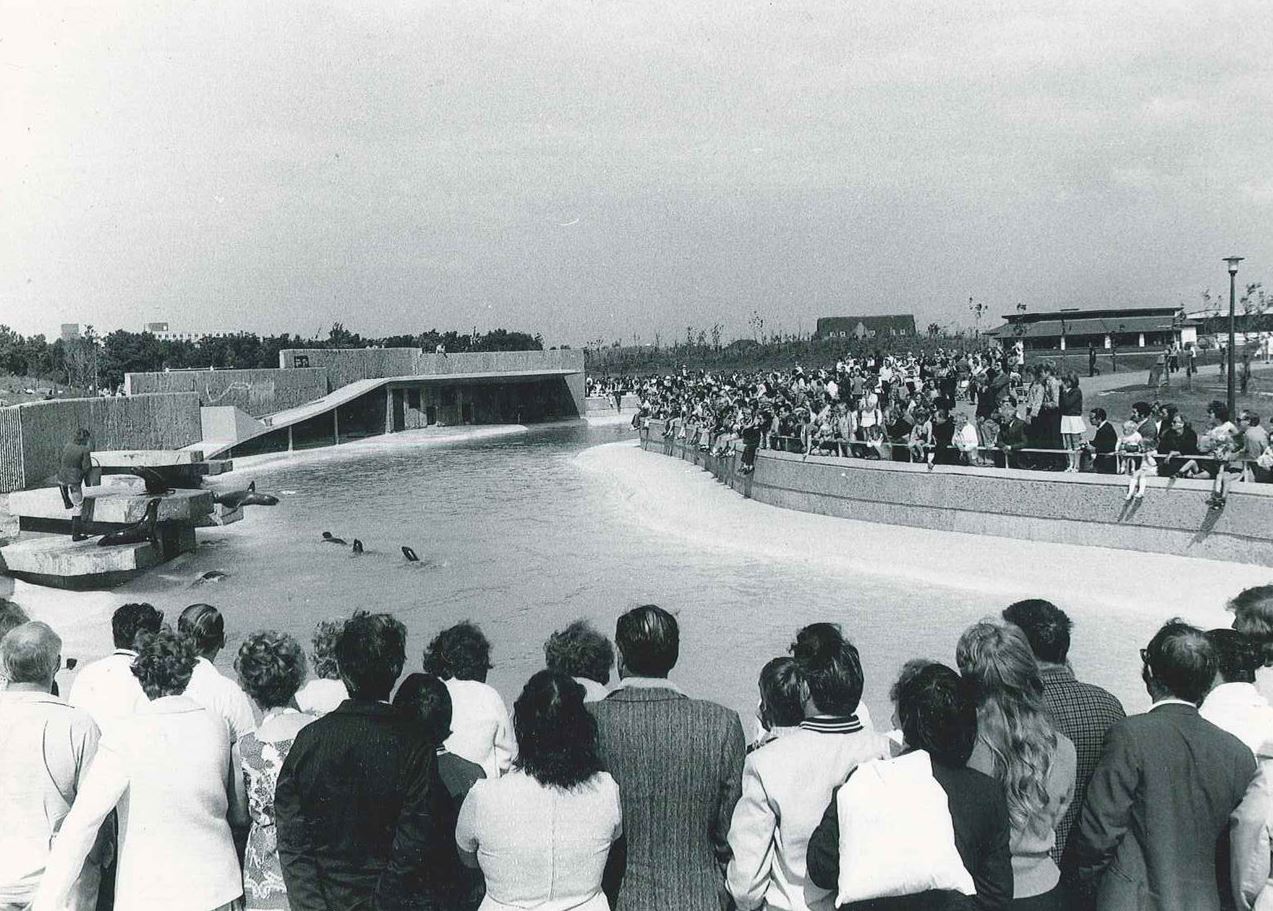 Blackpool Zoo and the site on which it stands has had a long and varied history.

In 1931 Blackpool Municipal Airport opened on the site, with the former hangar and air traffic control building still being used today as the animal hospital and Education Academy.

At the start of World War 2 it was requisitioned by the RAF and used as a parachute training centre, then 4 hangars were built to assemble and repair Wellington Bombers.

Later it became home for the Royal Lancashire Show and following the closure of the Blackpool Tower menagerie the forward-thinking council had big plans for a 3-phase, 140 acre Zoo development incorporating the new idea of a safari park.  Rising costs, however, mean that the Zoo was never developed from the original 32 acres.

In a blaze of publicity on 6th July, 1972, Blackpool Zoo was opened by Johnny Morris of TV ‘Animal Magic’ fame riding to the zoo on an elephant, accompanied by the Mayor in a Rolls-Royce.  In true Blackpool fashion, it rained all day but the VIP guests enjoyed their day being treated to tours of the zoo and fabulous food.   To begin with the zoo houses two Asian elephants, three White Rhinos, two giraffes, sea lions, gorillas, chimpanzees, orangutans, lions and two giant tortoises.

1993   the way the council funds the zoo is reorganised, giving more freedom to develop. It is also deregulated for V.A.T. and this is backdated 5 years giving the Council a cash windfall and a new entrance and shop are opened.  The giraffes leave Blackpool Zoo a couple of years after the White rhinos, to allow greater facilities for the elephants.

1999  the zoo acquires two more Asian elephants making a total of four at the zoo. These come from the Berlin State Circus, which is going into liquidation.
Lemur Wood is built on the site of the old Giant tortoise enclosure. This facility houses three species of lemur; Ring-Tailed, Black and Red Ruffed.

2000  Gorilla Mountain is built on the site of the old Markhor Goat enclosure giving the gorillas greater freedom to forage in a more natural setting.

2002  the new red panda enclosure is completed during this year, housing two animals. It is a conversion from the old meerkat enclosure

2003  Grant Leisure Ltd took over the management of the zoo. This resulted in major new development including a new entrance hall opening in 2005 housing a coffee shop, gift shops, lecture theatre and admissions.  The same year also saw Dinosaur Safari open and a display arena.

2006  Amazonia was launched this year - developed in the water gardens which were closed several years ago - visitors could sample life in the rainforest, amidst animals including Squirrel monkeys, Marmosets, Ted Titi monkeys, agouti, toco toucans and numerous species of parrot and water fowl.  Further investment results in the transformation of the old office block into a 66 place children’s day nursery, A-Zoo Nursery.

2007 The zoo is taken over by Parques Reunidos, a Spanish-based leisure organisation who have pledged further investment into the animal sector at the zoo, with planned new exhibits to include more lions, giraffes, penguins and white rhino, as well as refurbishment of some of the original enclosures.

2008  new developments this year are being added at a fast and furious pace! The magnificent Arnie Aardvark’s Adventure Playbarn is also open and proving a very popular addition.  Due to popular demand, giraffes returned to the zoo during the summer. Always at the top of the list of most-wanted animals, these beautiful, gentle giants undoubtedly captivate visitors and staff alike.

2009  another favourite of the visitors makes a welcome return - penguins. The first phase of the Active Oceans area is completed with a raised pool with underwater viewing of these very entertaining birds. The species taking up residency is Magellanic penguins, native to South America and the only ones of their kind in the UK

2010  Active Oceans is completed with the refurbishment of the sealion pool, already the largest pool in the UK. The surround is naturalised and a 400-seater grandstand added. Huge glass windows allow superb viewing of the training routines demonstrated several times a day.
Wallaby Walkabout opened offering close encounters with a variety of marsupials including red and grey kangaroos as well as the wallabies. The zoo welcomes the safe arrival of its first Western Lowland gorilla baby, Meisie

2012  the zoo marks its 40th anniversary with celebrations taking place on the original opening date of Friday 6th July. Pupils from Stanley Infants School in Marton, which in 1973 became the first school to take part in an educational visit, a­ttend a special birthday.
Another new development is completed in the anniversary and after a £500,000 investment Wolf Ridge is opened to the public, housing a pack of Iberian Wolves

2014  the results of what was then the biggest animal investment in the zoo’s history are unveiled. Orangutan Outlook, which has split level viewing complete with huge windows, is home to one male and three female Bornean orangutans.

2015  the launch of the brand new Education Academy took place after a £100,000 investment in the former air traffic control tower.

2017  at the beginning of its 45th anniversary year, Blackpool Zoo launches a year of celebration. Its oldest resident, and one of the first to arrive at Blackpool Zoo in 1972, Darwin the Aldabra tortoise turns 100 in February and the zoo welcomes its 15th Millionth visitor in April.

2018  Blackpool Zoo reveals the incredible results of its largest ever investment. The multi-million pound elephant facility, which is called Project Elephant Base Camp, combines the UK’s largest indoor elephant house with a huge outdoor habitat.

2019  another incredibly exciting year unfolds at Blackpool Zoo as it welcomes some of the world’s most endangered birds. Two of the world’s most endangered birds, the Bali Myna and the Blue-crowned Laughingthrush take up residence alongside other highlighted species. Bird keepers also work on a new interactive experiential walkthrough a­ttraction that allows visitors to get close to its beautiful Rainbow Lorikeet birds and the zoo’s Amazonia attraction was refurbished to become a dedicated international aviary called World of Wings.

2020  the year starts just like any other with the annual animal head count and planning for events, school visits and everything else for an action-packed 12 months. As news of Covid-19 intensifies in March, it soon becomes clear that the nation would be entering an unprecedented time and staff watch, along with the rest of the UK as the Prime Minister announces the first national lockdown. Keepers keep on keeping to take care of more than 1000 animals and a small team of management, maintenance, grounds and cleaning staff remain to plan for when the doors could open again. More lockdowns followed, with the team facing each one with stoic resilience.

2021  news of yet another lockdown comes in January and the zoo gates once again opened following the easing of national restrictions on April 12th.   Peter Morris, who started his first day of work at Blackpool Zoo in October 1973 retires after becoming the longest serving keeper in the zoo’s history.
A decade-long absence of Red panda babies comes to an end in June when keepers are overjoyed to find the two adorable additions nestled together shortly after their birth.

2022  huge celebrations for Blackpool Zoo’s 50th anniversary are planned, which also marks the f rst restriction-free year since the pandemic started. Plans to renovate and extend the Big Cat facility, are announced early in the year. A new house for meerkats and mongoose along with the refurbishment of the zebra house and improvements for the bird facilities and the penguin pool are all announced. The Playbarn reopens following considerable refurbishment and Blackpool Zoo becomes the first zoo in the UK to be home to Subway, which is located in Lake View Café

Elderly ele knows there is no place like home

One of the first four animals to arrive at the zoo is still there! Kate the Asian elephant is now 54 years old.  She came to the UK in 1971 and was housed in a secret location until the zoo opened.  Kate is now under a tailored care programme, which involves weekly pedicures from specialist zoo staff in the zoo’s new elephant facility - Project Elephant Base Camp.

In 1979, the then Mayoress sat inside an enclosure for tea with the orangutan, Azimath. Such close contact with zoo animals was banned in late 1979, with new health and safety rules introduced year on year since then. In June 2022 the zoo bid a fond farewell to one of its most popular primate residents. Ramon,  the male orangutan moved to Allwetterzoo Munster in Germany.  The move was recommended by the International Studbook Keeper, who manages the breeding programme for the critically endangered Bornean orangutan, and paved the way for a new breeding male, Kawan, to join the females Summer, Cherie and Jingga in late June.

In 1981 Nessie the sea lion arrived from Twycross Zoo but escaped through a fence and disappeared into the Flamingo Lake. She couldn’t be caught, but a door was left open and she went back into the sea lion house on her own. The night security man shut the door behind her.  The sea lion pool, which is the biggest in the UK, is still housed next to the Flamingo Lake and is home to seven Californian sea lions.

In recent years, millions of pounds have been invested in the zoo and areas such as Project Elephant, Orangutan Outlook, Giraffe Heights, Active Oceans, Wallaby Walkabout, The Children’s Farm and Wolf Ridge have been developed to allow visitors to get closer to the animals than ever before. In 2022 a raft of new investment was announced. New animal facilities for the big cats, meerkats and mongoose are underway. In addition, the zebra house is being refurbished while the bird facilities and penguin pool are also being improved. The Playbarn has reopened following considerable refurbishment and Blackpool Zoo also became the first zoo in the UK to become home to a Subway, which is located in Lake View Food Court.

Blackpool Zoo, driven by its passionate team, has always had big plans and continues to have big ambitions for future years....... 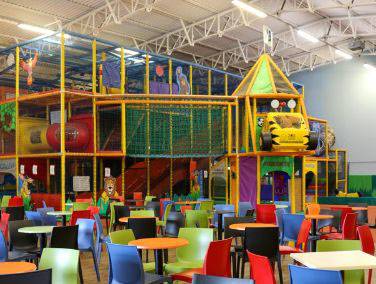 The Playbarn is open

The Playbarn is open